All Täljsten products are designed and produced entirely in Sweden.  It was Rolf Berggrund who first took charge of the development and production of the soapstone factory in Handöl, at the foot of the Jämtland Mountain Range, in 1987.  His wife, Marianne, followed him soon after, abandoning her career as a physiotherapist. Very quickly, she became fascinated by soapstone’s unique capacity to store heatand by how easy it was to shape.

« When I arrived in Handöl, I did a succession of different jobs, primary teacher, taxi and bus driver as well as assembly line worker at the soapstone factory.  My career finally caught up with me and I accepted a post as a physiotherapist 80 kilometres from home until a slipped disc got the better of me. Gradually, my knowledge of Händol’s heritage led me with a friend to set up a travel agency « Hanriis Hus » which had a small adjoining tea room, the main purpose of which was to promote the town of Händol through the history of its soapstone deposits.  In order to increase our range of products, I set up a studio workshop and started making soapstone candleholders and other crafts including jewellery.»

In the course of meeting and talking with her customers, Marianne discovered that soapstone could store cold just as well as hot. This was how she came up with the brilliant idea of making « ice » cubes for whisky. The expression « Whisky on the rocks » is well known so why not make real rocks in soapstone and call them « Whisky on the rocks Rocks »? This is how the ice cubes that never melt were born! The stonecutters were however not convinced. For them, using stone fragments to make ice cubes was a strange idea indeed!

« I started to look for pieces of soapstone amongst the leftover fragments in the factory. I shaped these fragments into little cubes, polished them by hand with a belt sander and then washed them in the dishwasher.  While they dried, I used the time to make the boxes and labels for packaging.»

It was in 1994 that the press seized upon the whisky stones.  Presented as a gift idea, the whisky stones got a lot of top media coverage and were also given to members of the International Olympic Committee visiting Sweden at the time.  Marianne Berggrund became the soapstone woman and was nominated with 10 others for the title of « Jämtland personality of the year ».

« I have been shaping soapstone from a very early age.  Indeed, as a teenager, I used to work full time with my father at the factory in Handöl.  Over several years, I learnt everything there is to know aboutsoapstone, its characteristics and the various methods of transforming it from raw material to finished product..»

Like any substance, soapstone requires a solid knowledge of the material to be able to make products of the best possible quality. This art of production has been handed down from centuries of history!  After several years working in soapstone, Erik takes a course in business management and sets up his own company Svenska Stenprodukter HB.

His company manufactures stone furniture such as worktops, benches and tables.  The firm has been very successful in this sector and now has a solid reputation among a primarily Swedish clientele.  Marianne and Rolf retire in 2009 and pass on the baton to Erik.

Soapstone has become a family affair.

« My family has a very close relationship with soapstone. The long family tradition around soapstone, which started in the 70s, continues through me. From now on, I am the only member of our family to work soapstone and the only one in possession of the know-how to pass on this art.  With my wife Jasmine, our dearest wish is to continue to supply high quality soapstone products for a long time and, in this way, give our customers unquestioning faith in this magical substance. We have entrusted the distribution of our products to specialists who share our enthusiasm and will know how to promote the high quality and originality of our product in the European market.» 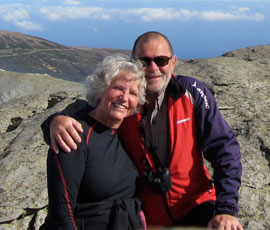 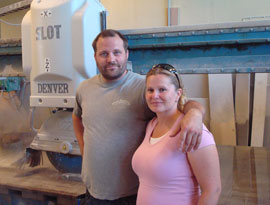